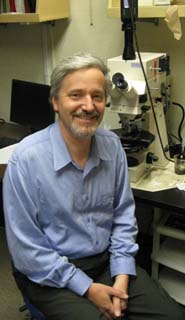 Research Interest: Neuronal development in Drosophila Areas of Research A. Neural development in Drosophila melanogaster. 1. We are focussing on the function of the adhesion molecules Drosophila E-cadherin homolog (DE-cad) and Fas (an Ig-like protein) during neuroblast formation, axonogensis and synapse formation in the embryonic and larval brain. Following the cloning of DE-cad, its phenotypic and expression analysis, we have generated constructs that allow us to overexpress normal and mutant DE-cad forms at specific times and locations during nervous system development. Tepass, U., Gruszynski-de Feo, E., Haag, T.A., Omatyar, L., TÃ¶rÃ¶k, T., and Hartenstein, V. (1996). shotgun encodes Drosophila E-cadherin and is preferentially required during cell rearrangement in the neuroectoderm and other morphogenetically active epithelia. Genes & Dev. 10, 672-685 Lekven, A., Tepass, U., Keshmeshian, M., Hartenstein, V. (1998) faint sausage encodes a novel member of the Ig superfamily required for cell movement and axonal pathfinding in the Drosophila nervous system. Development 125, 2747-2758 Haag, T., Prtina, N., Lekven, A.C., Hartenstein, V. (1999). Discrete steps in the morphogenesis of the Drosophila heart require faint sausage, shotgun/ DE-cadherin, and laminin A. Dev. Biol. 208, 56-69 2. Of special interest is the question of the dynamic regulation of DE-cad. Based on genetic evidence we hypothesize that the Drosophila EGF-receptor is crucially involved in this regulation. We use a genetic and biochemical approach to investigate this hypothesis Dumstrei, K., Nassif, C., Abboud, G., Aryai, A., Aryai, AR, Hartenstein, V. (1998) EGFR signaling is required for the differentation and maintenance of neural progenitors along the dorsal midline of the Drosophila embryonic head. Development 125, 3417- 3426 3. Using specific markers, we have initiated a "Drosophila brain mapping" project. The markers are expressed from embryonic stages onward in specif ventral gradient that specifies the different domains within the eye field. Hh is secreted at the lateral boundary of the eye field and may form a gradient that antagonizes the early Dpp gradient. We are reconstructing the details of the fate map of the Drosophila head, and study experimentally the function of the Hh and Dpp gradients in patterning the fatemap. Rudolph, K., Liaw, G., Daniel, A., Green, P.J., Courey, A.J., Hartenstein, V., Lengyel, J. (1997). Complex regulatory region mediating tailless expression in early embryonic patterning and brain development. Development 124, 4297-4308 Nassif, C., Daniel, A., Lengyel, J.A., and Hartenstein, V. (1998) The role of morphogenetic cell death during embryonic head development of Drosophila Dev. Biol. 197, 170-186 Daniel, A., Dumstrei, K., Lengyel, J., Hartenstein, V. (1999) tailless and atonal control cell fate in the embryonic visual system. Development 126, 2945-2954 Lebestky, T., Chang, T., Hartenstein, V., Banerjee, U. (2000) Specification of Drosophila hematopoietic lineage by conserved transcription factors. Science 288, 146-149 C. Neural development in primitive invertebrates: platyhelminthes One of the most astounding realizations of modern developmental biology is the high degree to which genes or even complete gene networks are conserved among all animal groups. Examples can be cited for virtually all fundamental developmental steps (e.g., establishment of body axes, gastrulation) and organ systems. In light of these findings the interest in comparative embryology as a basis for discussion of homologies between cells, tissues and organs has increased over the recent years. The fact that animals as divergent as flies and humans express regulatory genes such as eyeless , orthodenticle or the Hox genes implies that the common ancestor had these genes in its genetic repertoire; but what biological function did they serve? It is generally believed that the common ancestor of gastroneuralians ("protostomes") was a simple bilaterian organism with features such as a small acoelomate body, ciliated epidermis with underlying muscle layer, and a single gut opening. Many of these primitive features are conserved among the present day platyhelminths, a taxon that on the basis of morphological evidence has split early from the gastroneuralian (protostomian) line. We have studied the normal development of representative of several flatworm taxa and are now focussing on two species that can be raised in the lab. PCR based cloning of homologs of genes involved in neural development of both Drosophila and vertebrates is under way. Younossi-Hartenstein, A., Ehlers, U., Hartenstein, V. (2000) Embryonic development of the nervous system of the rhabdocoel flatworm Mesostoma lingua (Abildgaard, 1789). J. Comp. Neur. 416, 461-476 Hartenstein, V., Dwine, K. (2000). A new freshwater dalyellid flatworm, Gieysztoria superba sp. nov. (Dalyellidae: Rhabdocoela) from Southeast Queensland, Australia. Memoirs of the Queensland Museum 45, 381-383 Younossi-Hartenstein, A., Hartenstein, V. (2000a) The embryonic development of the dalyellid flatworm Gieysztoria superba .Int.J.Dev.Biol. (in press) Younossi-Hartenstein, A., Hartenstein, V. (2000b) The embryonic development of the polyclad flatworm Imgogine mcgrathi Dev. Genes Evol. 210, 383-398 Hartenstein, V., Ehlers, U. (2000) The embryonic development of the rhabdocoel flatworm Mesostoma lingua. Dev. Genes Evol. 210, 399-415 Ramachandra, N.B., Ladurner, P., Jacobs, D. and Hartenstein, V. Neurogenesis in the primitive bilaterian NeochildiaI. Normal development and isolation of genes controlling neural fate. In prep.

Younossi-Hartenstein, A Ehlers, U Hartenstein, V   Embryonic development of the nervous system of the rhabdocoel flatworm Mesostoma lingua (Abilgaard, 1789) The Journal of comparative neurology. , 2000; 416(4): 461-74.