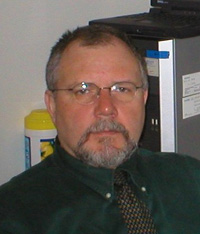 Dr. Jeffry R. Alger received a PhD in biophysical chemistry under the direction of Professor James H. Prestegard at Yale University in 1979. Dr. Algers PhD dissertation research focused on nuclear magnetic resonance magnetization transfer. He did postdoctoral training on multinuclear magnetic resonance spectroscopy (MRS) of cells and living animals in the Yale Department of Molecular Biophysics and Biochemistry between 1979 and 1984 under the direction of Dr. Robert G. Shulman. During his appointment as assistant professor in the Yale Department of Radiology (1984-1986), he participated in the design and construction of the first Magnetic Resonance Center at the Yale University School of Medicine. From 1986 until 1994, Dr. Alger was a staff scientist, and later a section chief, at the National Institute of Neurological Disorders and Stroke in Bethesda, Maryland. During this period he performed some of the first proton MRS studies of human brain cancer and was an early pioneer in diffusion magnetic resonance imaging (MRI) of stroke. In 1994, Dr. Alger moved to Los Angeles and became a faculty member at the University of California, Los Angeles (UCLA) in the Department of Radiology and in the Ahmanson-Lovelace Brain Mapping Center. He was promoted to the rank of Professor in July 2000. His primary faculty appointment moved to the UCLA Department of Neurology in 2005. His current research lies in neuroscience imaging applications of MRI with focus on MRS, diffusion tensor imaging and perfusion imaging. A general research goal is to develop magnetic resonance biomarkers that can assess neurological diseases and disorders. He collaborates with teams doing clinical trials and clinical research studies involving stroke, traumatic brain injury, cerebral neoplasia, multiple sclerosis and HIV dementia. In 2007 his laboratory acquired a 7 T 30 cm MRI system which is being used to pursue analogous research in animal models. Dr. Alger has co-authored more than 140 peer-reviewed publications. His research has been funded by the National Institutes of Health and by private foundations. Dr. Alger is affiliated with UCLAs Interdepartmental Program in Biomedical Physics where he teaches graduate level courses in human anatomy and medical imaging. He also supervises the dissertation research of medical physics PhD students.